Posted by karthikeyan at 8:25 PM No comments:

How to handle Problems in our life - SaiCharan TV

Posted by karthikeyan at 10:18 AM No comments:

Posted by karthikeyan at 6:16 PM No comments:

Sri Bodendral (pronounced Bodendraal) was born in 1610 AD in Kanva Gotram and given the namam of Purushothaman by his parents, Sri Kesava Panduranga Yogi and Srimati Suguna Bai. Early on, Sri Purushothaman came under the grace of the then Kanchi Kamakoti Peetam Acharyal, Sri Athma Bodendra Saraswathi (or Athma Bodendraal), to whom his parents were devoted. Eventually, he was anointed the 59th Acharyal of Sri Kanchi Kamakoti Peetam in 1638 AD. Sri Bodendral was on the forefront of establishing Nama Siddhantam. He was the first Guru in Bhajana Sampradhayam. Sri Bodendral was the contemporary of Sri Sridhara Venkatesa Ayyaval of Tiruvisanallur and Sri Sadasiva Brahmendral. 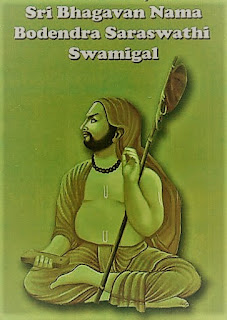 Sri Bodendral achieved Jeevan Mukthi on the banks of River Kaveri in 1692 AD. For a while, this place was lost and forgotten. In 1803, Sri Maruthanallur Sadguru Swamigal discovered the place after hearing Rama namam emanating from water here and had his Shishya, King Sarabhoji divert the river. Even now, there are reports of devotees hearing Rama namam in Sri Bodendral's Adhishtanam in Govindapuram, Tamil Nadu. Sri Bodendral is Sri Guru of Sri Anna.

After instructing Sri Bodendral to proceed to Kanchi from Puri, Sri Atma Bodendral remained in Kashi. As his Guru commanded, Sri Bodendral proceeded to Puri Jagannath to obtain Nama Kaumudi, a masterly work written by Lakshmidhara Kavi, which propounded that Nama Japam and Bhajan were in accordance with Vedic scriptures. Kaumudi means Moon. Sri Atma Bodendral asked Sri Bodendral to use Nama Kaumudi to ward off resistance from conservatives, who would claim Nama Siddhantam was contrary to Vedic tradition. Later, Sri Bodendral would use Nama Kaumudi as foundation for many of his own works. Independently, Sri Ananda Deva had written a vyakyanam on Nama Kaumudi called Prakasham.
Sri Bodendral had Darshan of Lords Balarama, Subadra and Jagannath in Puri till the temple closed at night, chanting Govinda Namam. To avoid disturbing anyone late at night, he decided to spend the night outside a house unobtrusively.
Sri Bodendral woke up on hearing a Brahmin banging the door of the house at night, but decided to watch the event from darkness. The Brahmin was accompanied by a Muslim lady covered in veil. When the house-owner opened the door, the Brahmin started narrating his tale in tears: The lady in veil was his wife, although disguised in Islamic outfit. They left Tamil Nadu for Kashi, but were waylaid in Bamani Kingdom. The lady was dishonored and disfigured by Muslim extremists, but she managed to escape the terror and joined her husband months later. When they decided to take their lives, an elderly person advised them to approach Lakshmi Kanth, son of Lakshmidhara Kavi, for purification instead. Thus Sri Bodendral ended up at the right place to seek Nama Kaumudi, by Lord Jagannath's grace.

Per Lakshmi Kanth's advise, the Brahmin couple came to Chandan Talab lake the next day. While everyone was watching, the lady entered the lake and chanted Rama Rama Rama with devotion. When she emerged out of water, her disfiguration and Islamic outfit were gone and she came out as a traditional Brahmin lady exuding saintliness. This miracle established the effectiveness of Rama Namam in popular mind and later Sri Bodendral took the couple with him to Kanchi as living proof for Nama Siddhanta. When Sri Bodendral informed his intent to Lakshmi Kanth, he was given Nama Kaumudi. Its author Lakshmidhara Kavi had instructed his wife before his death to preserve Nama Kaumudi and pass it on to a saint from South India who would approach her years later.

Sri Bodendral nominated Sri Advaitatma Prakasendra Saraswati Swamigal to succeed him for Kanchi Peetam. In 1685, after leading Kanchi Peetam for 48 years, Sri Bodendral left it to his successor and departed for Govindapuram, a village named after Sri Govinda Dikshithar, a minister in Nayak dynasty. Sri Kanchi Paramacharyal speculated that Sri Bodendral started wearing Vaishnava symbol of Urdhva Pundram instead of the traditional Saivite symbol of Vibhooti during this phase. Per Sri Premika Vijayam, Sri Krishna Premi Swamigal had a darshan of Sri Bodendral wearing Urdhva Pundram. Sri Premika Vijayam also recounts a remarkable vision where Sri Bodendral took Sri Krishna Premi Swamigal to a pond where frogs were croaking 'Hara Hara Hara Hara' and assured that even the frogs were guaranteed Moksham. Such is the power of Nama Siddhantam.
As Sri Bodendral called his successor Govinda on occasions, Sri Advitatma Swamigal was also called Govinda Samyami. In 1692 AD Prajotpathi year Purattasi month full moon day, Sri Bodendral, treating himself as consort to Lord Rama, achieved Jeevan Mukthi, by burying himself in ground, just like Sita Devi had done ages back. Over 100 years later, when Sri Maruthanallur Sadguru Swamigal discovered the location where Sri Bodendral had attained Jeevan Mukthi, he also found Nama Kaumudi, that Sri Bodendral had carried with him all along.
Posted by karthikeyan at 2:04 PM No comments: